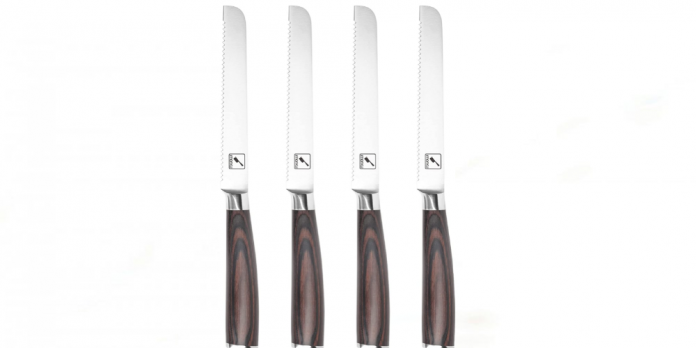 Knives have been around for centuries. They were thought to be sharp tools used to cut things. But have you ever pondered how steak knives become a part of kitchen cutlery? And how did keeping these knives in a box set become popular? Continue reading to discover a steak knife history and view details if you wish to get your hands on a high-quality steak knife!

Steak knife, like everything else, has an origin, a point where they started as. The steak knives you use to cut your steaks today have a long and interesting history. And learning about such a thing makes you see them from a different perspective. But before we jump into the steak knife history, knowing about table and butter knives is a must since they’re all intertwined.

History of a Butter Knife

About 400 years ago, long before the invention of a steak and butter knife, people used pointed knives to cut things, food included. They were generally part of table meals. Because there was no idea of a fork at the time, individuals sliced their meal with a single knife or their hands. The knife was given by the host, or guests brought their own knives to use for special occasions.

With no concept of dental floss or toothpicks, people also used pointed knives to pick on their teeth. For many years, this was the case until a cleric known as Cardinal Richelieu became dissatisfied with the custom. In an effort to detach himself from the long-ingrained table etiquette, he rounded the knife’s sharp edge.

Cardinal Richelieu, like many social media influencers today, was a strong man and an influencer. As a result, following his death, the King issued a proclamation making pointed knives unlawful both inside and outside the home. However, many people disregarded that and continued to utilize a sharp-edged knife for daily use.

Even after sharp-pointed knives were proclaimed illegal, individuals continued to use them in their kitchens because they required something sharp to prepare meals. You may think that steak knives were designed several centuries ago; however, this is not the truth. The steak knife did not necessarily exist before World War II.

After the long-fought WWII, a steak knife came in the form of a letter opener. A basic tool with sharp edges and a basic design was created to open letters. It was crafted as a gift for the owner of a blacksmith forge by an artisan. The blacksmith’s factory was also used to make cutlery during the time. This is the main reason why the elegant gift sparked an interest in the blacksmith’s family.

Tom, the mastermind behind contemporary steak knives, noticed the letter opener’s potential as a viable culinary utensil. He then requested a set of steak knives and a box set to keep them in due to its sharp edges. After examining the market and taking people’s views into account, he became sure that the steak knife was something that everybody needed.

Everyone in the house desired a sharp-edged knife for cutting their meat. As a result, the first steak knife on the market performed admirably, paving the way for the creation of current steak knives.

Who knew such an interesting story was attached to a steak knife history?

How Can You Tell if a Brake Caliper Has Gone Bad?

Why Bob Wigs Are the Best

How to Choose the Right Breast Pump?

Over the Knee Boots; How to Identify the Best Design

How to Choose the Right Breast Pump?

© All Right Reserved By Modernmommytime.com